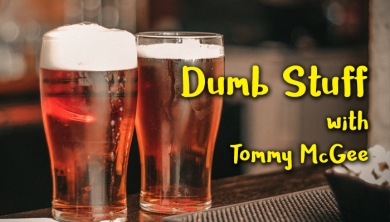 I’m Tommy and this is what I think about stuff that’s mostly dumb.

And before you get your shorts in a knot, it ain’t the current attention over guns that’s dumb. That’s important. The dumb stuff has everything to do with people and their current “response” to the gun thing…of course.

There’s a lot of money,  paranoia, misunderstanding, a whole lot of misinformation, a lot of rage and a bunch of other stuff that continues to take this issue way off the tracks.

Thing is, I don’t think we’ve seen all the dumb stuff related to this come to surface yet. There’s more to come for sure. But it don’t take a genius to know we’re doing it wrong.

Here’s the bit. We got a problem with guns here. You can say we don’t, but that would be blind ignorance talking. But instead of looking at it directly and naming it what it is, people are calling it a lot of other things like it’s bad immigrants or crazy people, not enough God, political philosophy, or drugs, or the decay of our collective moral fiber and all kinds of things. But when you boil it right down to the bones, it’s guns. Technically, it’s guns mixed with a double scoop of stupid…and bullets.

I grew up around guns. Not military grade weapons and the like, but still…guns.

I had some pretty shitty days growing up.

Still, I can’t recall one time when I ever thought of fixing my shitty day by running home and grabbing me up some guns…and bullets.

Why? Lots of reasons. Maybe, after a moment to consider my situation, my shitty day may not have been as shitty as I imagined. Maybe I’m not that kind of crazy. Perhaps it’s my practical understanding that shooting people is bad and that prison sucks pretty bad and it is not the place where I want to end up spending my time. As far as guns go, once you shoot them, you gotta clean them, so maybe I’m just lazy. I generally don’t carry around that kind of hate for people, despite how awful and dumb they can be and despite how much they might piss me off. Not on my worst day. But, that’s just me.

So, why do other people do it?

The dumbest thing of all is that we can’t get to the bit and fix the problem.

The gun people say there ain’t enough guns. They say everyone has a God-given right to have all the weapons they want and that the world’ll have to pry those weapons from their cold dead hands to get them. That seems to cover everything from a tiny pop gun to an all-out urban assault vehicle…and beyond.

The anti-gun people say the only way to solve the problem is to flat out get rid of all the guns. The end.

There’s a group that says if you take away all the guns, the people intent on doing others harm will just weaponize something else – like their cars or something. Then they ask, “What are you gonna do then? Outlaw cars? What then?”

Some nub in Kansas named Tyler Tannahill, is giving away the same type of assault rifle used on those kids in Florida as part of his Senate campaign. He says it’s OK though because he planned on giving that gun away before the shooting took place and he sees no reason to change the plan. Good call Tyler. You’re gonna fit right in. It comes off a bit tine deaf to the situation though.

No longer relevant Washington nub, Newt Gingrich wants to give guns to teachers. Apparently, that nub Trump thinks that’s a good idea too. Bite into that one and taste it for a minute. They say it would come in handy if another shooting occurs. You know, it’s just for self-defense and protection of others. Like that could never go wrong. First, neither of them had Mr. Terriman for eighth-grade English. That dude was itching to bring a little old West justice to the classroom…ass. Plus, solving the gun problem with more guns just doesn’t seem to make good sense on any level. Has anyone suggested the answer to the opioid problem is giving people more drugs? No? Of course not, because people understand that’s a dumb ass idea,

Finally, after a whole bunch of useless posturing and bluster comes the great debate – which is a dumb thing – because there ain’t a real debate, just a bunch of noise and finger pointing with pointed fingers that look like guns.

A real heart to heart needs to take place between folks who can step away from the pandering,  look at the issue clean and who can generate some kinda solid, workable solution.

We’re not gonna get that.

We’re gonna get four giant truckloads of stupid from every political blowhole that cares less about the issue and more about how they look on TV and what their polling numbers say. We’re gonna get rants from our goofy friends on the fringe who have no idea what they’re talking about but parrot rage just the same about losing their second amendment rights. They don’t really know what that means of course. Before now, they thought the right to bear arms meant they could cut the sleeves off all their t-shirts without government interference.

It’s a sad state when the bulk of us, the ones who are just trying to get through the day to day the best way we know how without losing what we have worked hard for, to sit in the middle of this tempest of stupid and know that whatever happens – we’ll have to pay for it. We got kids acting like adults and adults acting like children and common sense is getting lost in the noise.

I figure this could probably be worked out over a couple of beers, a bowl of pretzels and a couple shots of “let’s get some stuff done” – if you turn the TV and the Internet off while the talk goes on, but that would be giving people a whole lot of credit.

Thanks for listening. – Tommy