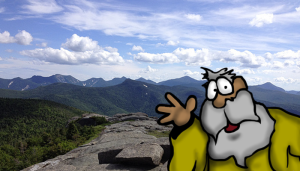 Sage advice from an elderly gentleman perched atop a lonely Mountain.

“Dear Banaba,” Terry writes. “What is happiness? Why is it so hard for us to find?”

To my new friend Terry, I say simply, “Happiness is the cloud you walk in.”

When you consider the state of the world and the plights of so many people who struggle to merely survive, it seems that happiness is the most elusive of all the feelings.

We are a funny species. We crave happiness. We long for it. We work very hard to define it. We are pretty certain we know when we do not have it. And yet, when we do, or we think we do, we don’t allow ourselves the luxury of enjoying it. We often squirrel it away so nobody will see it. We feel guilty when someone calls us out for having it and then strongly deny it as if there was a greater value in a common, universal misery. When we see others who may have it, we envy them and instead of celebrating with them, we question if and how and why they may be more worthy of happiness than we are. There are many vicious circles at work here and the very bit of it all is that it all resides in our brains.

I always say you are the arbiter or your existence. You own who you are. Happiness, like misery is a choice. Of course, there are forces in the world that you must deal with every day. These forces may test your commitment to your search for happiness, but only you can decide to give up the power that makes your happiness go away.

So many people scoff at this notion and look at me as if sitting on this mountain for so long has warped my sense of reality and my perspective of the human condition. To them, I say, “not that I am aware of.” Because the questions you pose Terry, are not new and for as long as we have roamed the Earth, humans have done a very poor job of recognizing and embracing their happiness.

To be happy, you must define what it is. You would do yourself a tremendous favor by defining it as something you can attain easily. Why make it harder than that?

If you define happiness more simply, perhaps as a positive state of mind that helps you work toward overcoming the challenges of your daily life, you will find happiness faster and more bountiful. In this case, happiness could be found in a good parking space, making it inside the house before it rains, the sip of an ice cold cream soda…so many things.

So you see Terry, because you don’t really find happiness, there is a sense of futility that comes with always looking for it.

Happiness lies in wait wherever you go and wherever you are. Making that your definition is not ignoring or glossing over the daily problems of life, for that will only lead to its own frustrations. Rather, it is embracing the knowledge of things as they are, knowing what you can do to change those things as needed – if anything – and knowing when to let them go. Accepting things as you have made them, after doing your very best work or putting forth your very best effort, even if they are not perfect – are good. And good is a profound seed for happiness to grow from.

Peace to you  – Banaba

*Editor’s note:
To read other “Something to Ponder” entries, search for Banaba at the top of the page.

Sage advice from an elderly gentleman perched atop a lonely Mountain.

“Dear Banaba,” she writes. “Why are people so stupid?”

To my friend, Myrtle I say, “Because.”

I say because, because there is really no better answer to that question, at least as Myrtle poses it.

It is what some might refer to as a “loaded question.” For without context, the ability to assist her in reaching a higher level of enlightenment is greatly diminished. Despite our very best efforts, to try and divine a satisfactory response that helps illuminate the pathway to resolution related to her specific need is very much like trying to lasso a single star in the great universe that surrounds us.

Let us try instead, to better understand what drives such a question, to then see if a more reasonable answer will present itself.

First, Myrtle is not alone in her search for the answer to this question. Many write to Banaba asking the very same thing with varying levels of related information. But the question itself seems to be more an expression of frustration. The motivation to ask the question comes when understanding the actions of those around us – both in circles close to us and those in representational groups we are forced to recognize – eludes us.

In most cases, it is clear that a person or persons have acted, or are acting, in a way that conflicts with what we see as our own definition of common sense. We see them as behaving contrary to what we deem as “smart” and the action is so far away from “smart” that in order to easily classify them for the sake of discussion, we must ordain them as “stupid.”

As an example, let’s say that many users of the Internet start responding to a common and widely dispersed post that asks, “What kind of cat are you?” You begin to see tens, then hundreds, then thousands of responses from some of your very closest friends and family members to throngs of total strangers, which define for you, and each other, what kind of cat they are.

We know, of course, they are not currently and never will be a cat. Let’s say too, that you do not like cats in the least. Let us say finally, that you find this kind of mindless group exercise to be a fruitless and meaningless waste of time.

You will certainly not be playing the game, for you could care less about what kind of cat you are. In fact, we could go as far to say that your strongest desire might be to post something completely contrary (like being a dead cat) that would wrinkle the noses of those who are playing the game.

However, since you see yourself as better than that, and you are not interested in dealing with the potential rage of a group of angry cat lovers, you do nothing. That lack of satisfactory action and the inability to put an end to the distraction causes frustration. In the worst case, this frustration can make one very angry to the point of wanting to break something, or wanting to punch someone in the face. But again, because you are so reasonable, you boil that frustration down to the point where all you have left is to ask, “Why are people so stupid?”

You don’t really need an answer.

You need a better question.

You need to release frustration that comes with trying to figure out what you may never know. You need to understand that the energy put into figuring out why people do what they do, may never result in an answer that gives you great insights, for the moment you think you’ve seen it all, a whole new crop of stupid is almost certainly guaranteed to rise up and greet you.

Thus, the better question for you Myrtle and so many others; the better possible pathway to a deeper layer of inner peace may be:

Why do I allow people who act contrary to my personal sense of, or definition of intelligence, distract me so that it restricts the progress I make on my personal journey to enlightenment?

Remember too, the you may at one time or another, do something that falls outside of someone else’s personal definition of smart. You will be a distraction to their focus, which feeds the pool of their frustrations, and they may one day write Banaba a letter about you.

Peace to you  – Banaba