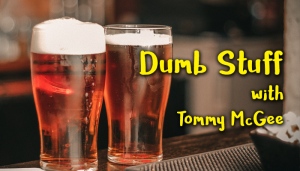 I’m Tommy and this is what I think about stuff that’s mostly dumb.

As you probably heard, both Donald Trump and Joe Biden have taken turns telling the press that, at some point or other – based on whatever the other has done – that each is confident he could and would give the other a solid beat down in a physical fight – to teach him a lesson.

Did you get all that?

Let’s face it, the whole kerfuffle is dumb! They can talk like that because they each wallow in the safety of being out of range of each other. Just like you putting stuff on the social media about folks you don’t like. You probably wouldn’t say it face to face, because if you did, someone might slap the shit out of your head.

These two nubs are never gonna fight. This nonsense is just taking up space that could be better used for the bigger stuff we should be talking about. I mean, it’s more embarrassing than amusing. It’s stupid.

However, I would be lying to you if, when I first heard this bubble up, that there wasn’t a small part of me that would actually like to see these two suit up and crawl into a ring somewhere. I mean, I’m not condoning any violence here (not that they could muster up enough energy to produce even minimal levels of violence) and I don’t believe there is any element of sport involved, but, if anything, the notion is so bizarre that for a moment, I thought, “Yeah, we should have them do that.”

I mean, it keeps coming up and they won’t let it die. Apparently, they are just not capable of moving on to the point that “threats” have been made or “gauntlets” have been thrown down. It’s like when you bump into that drunk guy in a bar – absolute mistake – totally innocent – could happen to anybody – but you caused a little bit of his drink to spill and instead of his hearing you say your very polite, “Gee, man I’m sorry,” (which is what I said, Louis) he hears you say, “Watchitdick!” and now wants to kick your ass.

It must have something to do with their perception of manhood, or manliness, or virility, or reliving some golden moment of their youth when maybe they could deliver a punch or two -or something other like that – that pushes them into this ego-driven, moronic, blind rage…or in this case, ego-driven, moronic, blind bravado. I wonder if they actually hear the words that dribble out of their mouths.

Look, not to take anything away from them, but these are not young men. They are older men who, instead of embracing the dignity and wisdom of their elder years, are acting like tired children who played outside too long on a hot summer day, but who are still so jacked up from all the Kool-Aid®, they can’t think straight. Maybe they need a nap.

These are supposed to be our esteemed leaders. The ones who we task with setting a vision for the country and leading us into a better future. Instead, they are embarrassing themselves and proving to be an embarrassment to all of us, partly because they are actually saying these stupid things out loud and partly, and probably more importantly, because I think we can all picture how it would go in our heads. The vision is…disturbing.

My mind instantly conjures two, slow, sweaty, puffy (one puffier than the other for sure), winded, crepy, veiny, elderly men standing opposite of each other with boxing gloves on bigger than their heads. They wear giant pairs of shiny boxing shorts that start at their armpits and end at about mid-calf. They glare at each other with angry eyes that make statements and professions that their bodies are just no longer capable of delivering on. And should they start an actual bout, all you would hear is these wheezing gasps for breath in between the soft pat, pat, pat of feeble punches. I’m pretty certain they could each muster up the intent to do the other one harm, but the delivery system just doesn’t exist.

When my Uncle Larry got old to the point where he started talking crazy, saying stuff like he wanted to punch the paperboy to teach him a lesson for always tossing his paper into the hydrangeas or his wanting shoot the squirrels in his backyard because they ate too much of his birdseed, we took his car keys away and made sure he had more company to keep an eye on him. Is anyone keeping an eye on these guys?

Like I said, a lot of this is bravado. Bluster and noise wrapped in the notion of teaching someone else a lesson on how to behave (note the irony). And despite the intentions, these are actually prominent displays of old-school, bull-headed mindsets of men who appear to be incapable of taking a more enlightened approach to resolving even the smallest of issues. If you want to teach someone a lesson, I think leading by a better example or setting a higher standard is the way to go. The knock your block off stuff is counterproductive and like I said…just dumb.

Thanks for listening, – Tommy